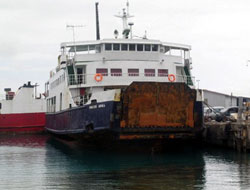 One British man was killed and 40 people were missing and feared dead after an overnight ferry capsized in open waters near Tonga's capital Nuku'alofa.

One British man was killed and 40 people were missing and feared dead after an overnight ferry capsized in open waters near Tonga's capital Nuku'alofa.

One British man was killed and 40 people were missing and feared dead after an overnight ferry capsized in open waters near Tonga's capital Nuku'alofa, officials said Thursday.

The Pacific Ashika, en route from the capital to outlying Ha'afeva island, rolled and sank just before midnight on Wednesday, officials said.

The Shipping Corporation of Polynesia, which operated the inter-island ferry, estimated there were 96 people on board. Tongan police said 55 survivors had been rescued and one body, that of a British man, had been recovered.

Most of the missing were believed to be women and children who were asleep below decks when the vessel sank, survivors said.

Australian Prime Minister Kevin Rudd, hosting a meeting of South Pacific leaders in Cairns, said there had been "considerable loss of life".

"As leaders of the Pacific Islands Forum we have already extended to the prime minister of Tonga our condolences to the people of Tonga," Rudd said.

The sinking was "doubly tragic for the Pacific region" as it followed the sinking of a ferry last month in Kiribati which left 33 people dead, New Zealand Foreign Minister Murray McCully said.

Ferries provide a lifeline for the people in Tonga, a sprawling island nation.

Although the official manifest showed 79 passengers and crew, police said the exact number of people on board was still unknown.

"Realistically we believe there were more passengers on board but we could not confirm at this stage how many they are," Chief Inspector Sokopeti To'ia said.

A spokesman for the New Zealand rescue centre, which was co-ordinating the search effort, said the Princess Ashika issued a mayday call at about 11:00 pm Wednesday and sank about 86 kilometres (53 miles) northeast of Nuku'alofa.

"A trail of debris from the sunken vessel, stretching about eight nautical miles, had been sighted in the area and the search vessels were targeting that area," search and rescue officer Mike Roberts said.

It was not immediately known what caused the ferry to sink.

Survivor Siaosi Lavaka told the Matangi Tonga Online that the ferry had been rocked by big waves, and that he believed the cargo -- which included an ambulance and other vehicles -- had shifted, causing the ferry to overturn.

"We woke up to the sound of shouting and we jumped off," he said.

Seven lifeboats which were flung into the sea were soon filled with male survivors and when the ferry sank, he said he believed the women and children were still inside.

"No women or children made it," he said.

Many Tongans had expressed concerns about the seaworthiness of the 34-year-old Princess Ashika, which had been sent from Fiji this year to replace the Olovaha, which was no longer deemed safe.

The Princess Ashika was to be used until 2011 when a new ferry, currently under construction, is due to go into service.

This news is a total 4614 time has been read