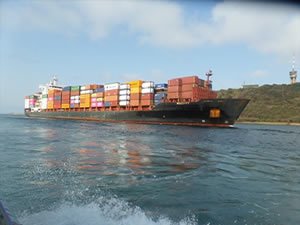 The containership was boarded on January 23 while underway from Lagos to Cape Town, according to Maritime Domain Awareness for Trade – Gulf of Guinea (MDAT-GoG), a cooperation center between the Royal Navy and the French Navy.

One seafarer has reportedly been killed while 15 others have been kidnapped after a group of armed pirates breached into the citadel on board the Liberian-flagged containership identified as MV Mozart approximately 98 nautical miles northwest of Sao Tome, Dryad Global said.

The containership was boarded on January 23 while underway from Lagos to Cape Town, according to Maritime Domain Awareness for Trade – Gulf of Guinea (MDAT-GoG), a cooperation center between the Royal Navy and the French Navy.

The ship had a total of 19 crew members on board, and three were left on board Mozart after the pirates departed.

Dryad Global said that the attack was exceptional for both its severity and distance from shore, being the furthest offshore incident recorded in West Africa.

This the 5th offshore incident in the GoG HRA this year.

A total of 135 crew were kidnapped from their vessels in 2020, with the Gulf of Guinea accounting for over 95% of crew numbers kidnapped, the International Chamber of Commerce’s International Maritime Bureau (IMB) said in its latest piracy report.

A record 130 crew members were kidnapped in 22 separate incidents, as the GoG experiences an unprecedented rise in the number of crew kidnappings since 2019.

Following the rising number of attacks in the region, the world’s largest container shipping company Maersk called for the establishment of a naval mission to the Gulf of Guinea to bring an end to terrorizing of seafarers while crossing the area.

The call came after two of its vessels fell victim to pirate attacks within less than a month.

Specifically, the 4,496 TEU Maersk Cardiff was approached by a small vessel some 150 nautical miles southwest of Bonny in the evening of 13 January 2021. The boarding was thwarted by the arrival of a guard vessel and the crew was safe.

The attack came on the back of a similar incident reported by Maersk Cadiz which was boarded by pirates in December while en route from Tema, Ghana to Kiribi, Cameroon. The vessel was secured by the Nigerian navy and escort vessels.

This news is a total 1837 time has been read
Tags: Dryad Global, Gulf of Guinea, piracy.mt mozart , GoG HRA