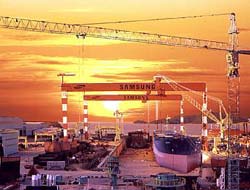 Samsung Heavy bags orders for 54 ships in the first half of 2007 and claims more records.

Samsung Heavy bags orders for 54 ships in the first half of 2007 and claims more records.

On June 29, Samsung Heavy Industries (SHI) announced that it had received an order from a US firm to manufacture two drill ships. This order put SHI’s combined orders for the first half of the year to over USD 10 billion. This is the first time ever that a shipbuilding company has received ship orders of over USD 10 billion in only six months.

So far this year, SHI has received orders for 25 container ships, 18 oil tankers, 6 LNG ships, and 5 drill ships, the combined value of which amounts to USD 10.1 billion. SHI now expects to soon surpass its sales amount for the year of 2006, which was USD 12.6 billion. In acknowledgement of this likelihood, SHI has upwardly adjusted this year’s order target, to USD 15 billion from USD 11 billion.

SHI also has an order backlog worth USD 33 billion, which amounts to more than three years of work. The Korean shipbuilder also broke its previous price record for an individual ship by building a ship valued at USD 177 million. SHI now receives 81% of high valueㅡadded ship orders in the world, also a record market share.

SHI has also received orders for eight 12,600TEU container ships (the world’s biggest) and four 266,000㎥ LNG ships (the world’s highest volume) so far this year. SHI also plans to build a drill ship that is to cost USD 600 million, the world’s most expensive price for a single ship.

SHI had originally set its ship order target to USD 11 billion this year, less than last year’s performance of USD 12.6 billion, based on a belief that there would be less ship orders in 2007 than in 2006.

However, SHI was able to achieve orders of more than USD 10 billion in only six months for many reasons, including the following: SHI’s worldㅡclass research and design manpower contributed to the development of economical products, there was an unexpected increase in ship orders from emerging markets, including China and India, and orders related to offshore facilities in the North Sea and in polar regions grew.

In 2006, SHI established its new vision of becoming the top manufacturer in its class by 2010. SHI already possesses worldㅡclass technology, and thus is refraining from taking orders for general oil tankers and midㅡsized container ships, choosing instead to make inroads into new areas, including high&min;tech ships, and new types of ships designed to operate in polar regions.

In fact, SHI has developed the first iceㅡbreaking oil tankers and polar region drill ships in the world, making inroads into the Russian market, where oneㅡthird of world’s crude oil and half of natural gas are buried, ahead of their competitors. SHI plans to advance into the deep&min;sea and polar regions, by focusing on newㅡconcept ships, such as drilling FPSOs.

The drill ships that SHI will build can operate in severe weather conditions, including waves of up to 16 meters, temperature of minus 20 degrees, and wind speeds of 40 meters per second. These ships are key drivers of the world shipbuilding industry. SHI takes 84% of market share in this area, receiving five out of every six orders placed worldwide.

CEO Kim Jing Wan said, “Since we have an order backlog of three years, our utmost task is to break into new markets, by focusing on quality improvement and constructing highㅡefficiency ships.”

This news is a total 1075 time has been read