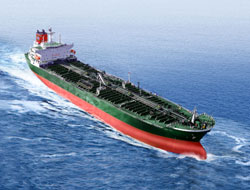 The Hong Kong-based company that operates the cargo ship that caused a 2007 oil spill in San Francisco Bay pleaded guilty Thursday to criminal charges. Fleet Management Ltd. pleaded guilty to charges of obstruction, making false statements and negligent discharge of oil, and agreed to pay a $10 million fine under a deal reached with prosecutors. A federal judge still must approve the deal.

The Cosco Busan sideswiped the San Francisco-Oakland Bay Bridge on a foggy morning on Nov. 7, 2007. The ship spilled 53,000 gallons of oil into the water, killing thousands of birds and other wildlife and fouling miles of shoreline.

The ship's pilot, John Cota, was sentenced in July to 10 months in prison after pleading guilty to two misdemeanor charges.

Court documents showed the company acknowledging its crew was poorly trained and the master failed to stop the pilot from leaving port in thick fog. The master admitted he could "suffer adverse personnel consequences" if he delayed departure, according to the court filing.

The poor training and the master's failure to delay departure led to the negligent discharge count.

The company was charged with obstruction and making false statements for creating and presenting to investigators false navigational documents.

The day after the accident, an unidentified Fleet executive ordered the ship's second officer to create a "berth-to-berth passage plan" that was supposed to have been made before the ship left port, according to the court document.

Another Fleet manager was aware of the document's creation and the ship's master signed the false passage plan "because he thought that not doing so would make the superintendents angry," according the joint factual statement signed by prosecutors and lawyers for the company.

The false passage plan was given to Coast Guard investigators and a federal grand jury looking into the accident. Crew members also altered navigational charts after the accident, according to court records.

The National Transportation Safety Board concluded earlier this year that a medically unfit pilot, an ineffective captain and poor communications between the two were the primary causes of the accident.

No one was injured in the crash, but the spill contaminated 26 miles of shoreline. It also killed more than 2,500 birds of about 50 species and delayed the start of the crab-fishing season. Cleanup efforts cost more than $70 million.

Fleet and Regal Stone Ltd., which owns the Cosco Busan, face several lawsuits from fishermen, cities along the bay and others affected by the spill.

This news is a total 1378 time has been read