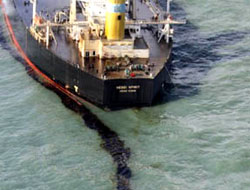 Hong Kong-based Fleet Management will pay a $10 million penalty after a U.S. District Court judge in San Francisco on Dec. 11 accepts a plea agreement that the company reached with the Department of Justice in the Cosco Busan oil spill case. The Department of Justice announced that Fleet Management, the ship"s management company, agreed to pay the penalty for negligently spilling some 53,000 gallons of fuel oil into San Francisco Bay after the Cosco Busan struck the Bay Bridge on Nov. 7, 2007. The company also pleaded guilty to obstruction of justice and creating false documents to deceive Coast Guard investigators.

Fleet Management had been scheduled for trial on Sept. 14 after pleading not guilty to six felony counts. In June, the 9th Circuit U.S. Court of Appeals denied the company"s motion to limit penalties in the case. The company could have faced up to $40 million in penalties.

The Justice Department also said that Fleet Management will develop a comprehensive compliance plan that would include training and voyage planning for ships in the U.S. trade.

Two million dollars of the settlement will be allocated for marine environmental projects in the Bay Area. Oil from the vessel"s ruptured fuel tank spread along 26 miles of shoreline, and killed 2,400 birds.

This news is a total 2084 time has been read