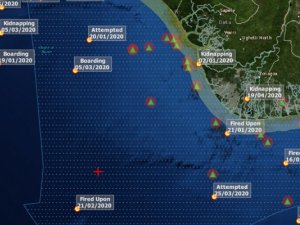 Ten seafarers are reported to have been kidnapped by pirates from the product tanker Vemahope off Nigeria.

An unknown number of pirates in speedboat are reported to have boarded the 6,152 dwt product tanker Vemahope and kidnapped 10 seafarers, according to Dryad Global.

The Greek-owned tanker was 178 nm SSE of Lagos at the time of the incident.

“With the kidnap of 10 crew from the Vemahope the total number of crew kidnapped from vessels operating in West Africa within 2020 is increased to 42 personnel,” Dryad said.

“The incident is located 39nm NE of an incident involving a vessel being fired upon in February 20 and 101nm NW of what appeared to be a focus of incident reporting within 2019.”