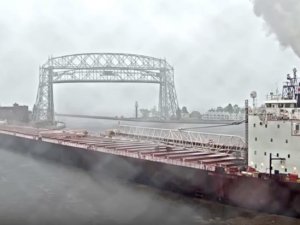 Minnesota’s Duluth Harbor was briefly shut on Sunday after a large laker ran aground just short a breakwall.

The 990-foot M/V American Spirit was departing Duluth Harbor fully loaded with taconite when it grounded about 50-feet from the breakwall at approximately 3:30 p.m. local time while attempting to turn out of the harbor.

A time-lapse video made from footage from a harbor camera, which is posted below, shows the incident as it unfolded.

The U.S. Coast Guard reports that the vessel floating free with rising water levels at about 10 p.m.

No injuries or pollution have been reported.

Afterward, American Spirit made its way under its own power to the Husky Fuel dock where the interior and exterior of the hull was examined.

A 500-yard safety zone established around the vessel was canceled when the vessel floated free.

Reports say heavy rain has made for treacherous currents in the area.

This news is a total 778 time has been read
Tags: 000-Foot Laker ‘American Spirit’ Runs Aground in Duluth Harbor