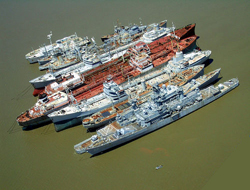 Shipowners may mothball the largest number of vessels since the 1970s as global trade slumps.

Shipowners may mothball the largest number of vessels since the 1970s as global trade slumps.

Shipowners may mothball the largest number of vessels since the 1970s as global trade slumps, according to GAC Solutions Ltd., the world's biggest provider of services to the industry. About 1,000 container and commodity carriers are sitting at anchor with no cargoes, GAC Group Vice President Christer Sjodoff said today. "Hundreds" of them may be taken into harbors for several months or years, he said. There are about 10,650 container ships and bulk and ore carriers in service, according to Lloyd's Register Fairplay data on Bloomberg.

"Everybody hopes the world economy will take a turn for the better and they don't sit there for years, but this doesn't look very positive at the moment," Sjodoff said by phone from Dubai. It's "very likely" many of the ships sitting at anchor will be suspended from service while trade recovers, he said.

Commodities demand is declining, with global growth likely to shrink for the first time since World War II, and trade may decline the most in 80 years, the World Bank said last month.

The Baltic Dry Index, a measure of shipping costs for commodities, plunged a record 92 percent last year.
The last time so many ships were mothballed, a process known as lay up, was during the oil crisis in the early 1970s, Sjodoff said. Some vessels still had no cargoes as much as a decade later, he said.
The number of crew left on board will vary depending on where they are stationed and how long they are laid-up for, Sjodoff said.

Anticipating queries from shipowners, GAC is preparing a manual on the most effective way to mothball ships and will start offering an official service as of next month. It also plans to supply equipment including dehumidifiers to stop damage to the electronics carried by ships.

Inchcape Shipping Services, a competitor, is now offering a similar service globally, according to a release posted on the company's Web site. Inchcape officials declined to comment.

This news is a total 3057 time has been read