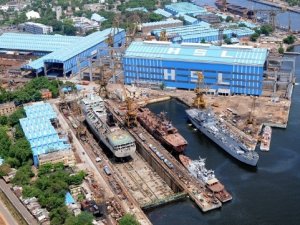 11 people were killed at a shipyard in Visakhapatnam, India on Saturday when a jetty crane collapsed during commissioning.

The incident occurred during load testing for a recently-installed rail-mounted crane at Hindustan Shipyard Limited (HSL), a government-owned yard in Andhra Pradesh.

"Extremely anguished by the loss of lives due to an accident at HSL facility in Vishakhapatnam. My thoughts are with the bereaved families. May the injured recover quickly," said Indian defense minister Rajnath Singh in a statement. "[A] Departmental Enquiry Committee has been instituted to establish the causes leading to the accident."

According to local officials, a team of contractors and shipyard employees were conducting a load test on the crane Saturday morning when it broke apart and collapsed. All 11 people who were in the operating cabin, including four HSL employees, were killed when it struck the ground. No additional personnel were injured.

The yard is conducting its own investigation into the circumstances in the casualty, and Andhra Pradesh chief minister Y S Jagan Mohan Reddy has called for an independent inquiry led by a panel of engineering experts.

This news is a total 2035 time has been read
Tags: 11 Killed in Crane Collapse at Indian Shipyard