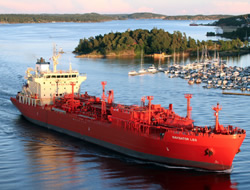 Shares of liquefied gas carrier Navigator Holdings Ltd, controlled by billionaire investor Wilbur Ross, rose as much as 11 percent in their debut, valuing the company at about $1.15 billion.

Navigator raised $228 million after its initial public offering was priced at $19 per share, the top end of its expected price range. The company’s shares were trading at $19.88 on the New York Stock Exchange, after touching a high of $21.12.

Navigator owns and operates the world’s largest fleet of handysize tankers, with a deadweight of up to 50,000 tonnes, that transport a range of liquefied gases, including liquefied petroleum gas (LPG), petrochemical gases and ammonia. It competes with Athens-based StealthGas Inc, Tokyo-based Nippon Yusen KK, Belgium-based Exmar NV and Norway-based Solvang ASA.

Navigator was previously controlled by Lehman Brothers Holding Inc, which sold its entire 44 percent stake in the company to Ross for $110 million through a bankruptcy court last year. Ross raised his stake in Navigator to 60.6 percent. Ross, whose company WL Ross & Co manages around $10 billion in assets, made a name for himself as a bankruptcy specialist, snapping up out-of-favour assets ranging from banks and textiles to steel and coal firms.

Ross has been betting on the shipping sector, which is in an extended downturn since the global economic crisis of 2008, and also owns a part of privately held Diamond S Shipping. Ships ordered before the recession hit the seas just as demand collapsed, leaving shippers to cope with rock bottom freight rates even as bunker fuel prices soared.

However, a small group of shippers, including Navigator Holdings, are beginning to benefit from the U.S. shale boom, with demand picking up for vessels that can transport the by-products of oil and gas production. Navigator Holdings, which has 23 vessels on the water, expects increased exports of LPG out of the United States.

The surge in U.S. shale oil and gas output has resulted in an abundance of LPG and given the scarcity and cost of storage infrastructure, large quantities of LPG are being transported overseas. Navigator Holdings is also seeing increasing movement of petrochemical gases, which are derived from processing oil and gas products.

Higher refining and chemical plant capacity in the Middle East and Asia is pushing demand for vessels that can transport petrochemical gases — used in plastics, organic chemicals and rubber. Navigator Holdings, established in 1997, said it intends to use proceeds from the offering to buy more vessels.

Of the 12 million common stock sold, Navigator offered 9.03 million shares, while the rest came from the selling shareholders. It had planned to offer 11.3 million shares. The company’s net income rose to $30.1 million for the nine months ended Sept. 30, 2012 from $21.7 million a year earlier. Operating revenue rose about 57 percent to $167 million.

This news is a total 2059 time has been read