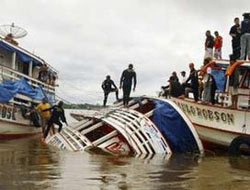 A boat ferrying at least 80 people home from a party sank in Brazil's Amazon region, killing at least 15 and leaving dozens missing, according to rescue officials and Brazil's government.

A boat ferrying at least 80 people home from a party sank in Brazil's Amazon region, killing at least 15 and leaving dozens missing, according to rescue officials and Brazil's government.

It was unclear how many passengers the Comandante Sales was authorized to carry, but authorities said the ferry had been grounded several months ago after failing an inspection.

Boats serve as buses in the area because there are few roads.

Rescue workers had recovered the bodies of 15 people by Sunday evening when the search was called off for the night, according to Agencia Brasil, the government's official news agency.

Most of those who died were women, and several dozen other people were unaccounted for, Silva said.

The search was scheduled to resume Monday, and an investigation into the cause of the accident is expected to take at least three months.

Amazon boats are frequently overloaded with passengers and cargo, which also may have been a factor, Silva said.

Revelers had rented the boat to travel from their small river town to another for a party, Brazilian media reported.

Some survivors swam to shore while others were rescued by other boats in the area, local media reported ? although authorities did not know how many survived.

Boat accidents have killed more than two dozen people in Brazil since February.

This news is a total 1517 time has been read