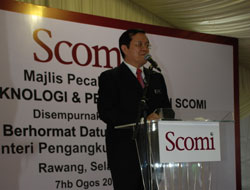 Scomi Marine Bhd plans to invest some US$150mil in the next three years to expand its fleet of marine vessels.

Scomi Marine Bhd plans to invest some US$150mil in the next three years to expand its fleet of marine vessels.

At a time when most companies are reluctant to spend on capital expenditure (capex), Scomi Marine Bhd plans to invest some US$150mil in the next three years to expand its fleet of marine vessels. There have been concerns that Scomi Marine, a 43% associate company of Scomi Group Bhd, had not been investing substantially to expand its fleet in the last two to three years to take advantage of the uptrend in activities in the oil and gas and logistics industries. The reason for this, according to president Mukhnizam Mahmud, was the view that prices of vessels were historically very high and not sustainable.

?We were concerned that if the market weakened, it would be tough to ensure sufficient returns on investment from the assets.

?The intention was to ride out the "growth" phase and once the market went into a downturn, prices would be attractive and at a more realistic level.

?We now see that situation occurring and asset prices have fallen,? he told StarBiz in a telephone interview.
Mukhnizam said the global credit crunch had affected the shipping industry in terms of financing for shipyards and vessel owners as well as charter rates, which had fallen with the slowing economy, thus contributing to lower vessel prices.

The Dry Baltic Index has dropped more than 92% to below 700 points from its all-time high in May.

?We see the market being in this state at least until the end of 2009. Although prices have not come down much for the type of vessels we are looking at, there have been movements downward.

?Scomi Marine"s strategy is to take advantage of this opportunity to acquire vessels at lower prices. The emphasis will be in three sectors ? offshore support, bulk and tankers,? Mukhnizam said.

?We are in discussions with customers on their requirements for 2009 and are in the process of identifying the vessels to invest in.

?Our planned capex for the segment is about US$50mil to US$55mil next year. Going forward, we plan to allocate US$30mil to US$40mil each in 2010 and 2011. Our aim is to acquire two AHTS every year,? Mukhnizam said.

Under the energy logistics services division, Scomi Marine is also targeting to grow the number of tugs and barges for the coal (bulk) logistics business and tankers to service a new refinery in Dzung Quat, Vietnam.

The group, which services Indonesia"s two largest coal producers, expects the tonnage carried to increase to up to 23 million tonnes next year from 21.5 million now.

?We want to add three or four new tankers with our joint-venture partner in Vietnam next year to service the Dzung Quat refinery which will be fully operational by the second half of 2009.

?A total of about US$75mil to US$100mil will be allocated for the investment,? Mukhnizam said, adding that Scomi Marine had a 20% stake in the joint venture.

This news is a total 652 time has been read