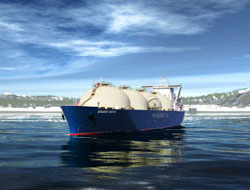 The government-owned company has a fleet of 132 vessels of 9.4m dwt after merging with rival tanker owner Novoship earlier this year.

Assets were valued at $5.8bn. Third quarter earnings before interest, taxes, cepreciation and amortization was $233m.

Sovcomflot is the world"s fifth-largest tanker company, and recently completed a rebrand of its operations, ahead of a widely anticpated listing in 2009, that has yet to be approved.

It has also consolidated its commercial and international sales activities for both Novoship and Sovcomflot at its UK headquarters.

?The group benefits from the fact that some two thirds of its fleet operates on a time charter basis,? Sovcomflot said in a statement with the results.

The remainder of the fllet operated on spot market mostly through time charter agreement or contracts of affreightment and voyage basis, the company said.

This news is a total 1531 time has been read