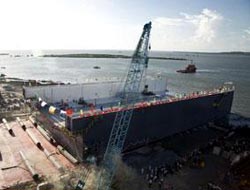 Western Australian shipbuilder Strategic Marine officially opened its $16.3m (USD) shipyard in Vietnam on February 24, demonstrating that the company is confident it can ride out the current global economic turmoil.

Newbold said with three other yards in Australia, Singapore and Mexico, the company was currently constructing 63 fully-financed vessels with an order book value of $164.2m, with an additional 77 vessels already contracted by international clients valued at $80m.

He also announced the company had pioneered and funded an apprenticeship scheme which would see 55 Vietnamese undertake a two-year course in a range of specialized shipbuilding skills.

?This scheme is expected to boost the National government"s plans to expand and modernize its shipbuilding industry, while helping us to upgrade skill levels,? Newbold said.

With its newest facility, Strategic Marine has transformed 136,000sqm of vacant land at Dong Xuyen Industrial Zone in Ba Ria Vung Tau province into a fully functioning shipyard with the capability to construct large steel and aluminium vessels.

Strategic Marine"s Vietnam Managing Director Mark Schiller said this feat could not have been achieved without the whole-hearted support of the Vietnamese authorities and local businesses, and the sheer hard work of the yard"s 1,100 employees.

To date, the facility has completed construction of the 103m x 50m steel pontoon base for the Australian Marine Complex"s $40.4m Floating Dry Dock, which was shipped to Western Australia late last year.

The yard"s most recent contract is worth $1.3m

The yard"s most recent contract, worth $1.3m, is to extend a floating dry dock for major shipbuilder STX Europe (formerly Aker Yards), a project that is expected to take three months to complete.

In addition, a further 30,000sqm has been given over to a heavy load laydown area and the yard"s three slipways are capable of handling the construction of vessels up to 200m long and 60m wide with a tonnage of 15,000T to accommodate a variety of vessels.

It is also equipped with more than 20 workshop overhead gantry cranes which range in size from 5T-20T, two 50T and two 200T crawler cranes.

Workshop equipment, including the latest CNC plasma cutting machines and steel cutting and rolling machines, ensure that ship construction and refit and repair requirements are catered for in-house and to international standards.

The newly introduced apprenticeship scheme had been developed by Strategic Marine in conjunction with Vietnam"s Hong Lam Vocational College and had been adapted from similar programs currently operating in Australia.

The apprentices will live at the college for the first three months of the scheme before gaining practical working experience for four days a week at the company"s yard, while continuing their studies at college on one day per week.

The trainees will receive a token salary early in their course, with salary increases every six months until the end of the program, when they will move onto the full salary scale for qualified tradespeople.

This news is a total 1244 time has been read