16 Detained in Connection with Beirut Explosion 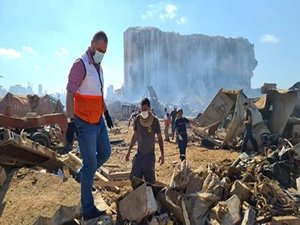 Lebanon's central bank has also moved to block the assets of the director of the port and the head of Lebanese customs, along with five other individuals, according to Reuters.

The government of Lebanon has detained 16 people in connection with the deadly blast that rocked Beirut on Tuesday. Additional individuals remain under investigation, commissioner Judge Fadi Akiki told Lebanese  state-owned outlet NNA. Lebanon's central bank has also moved to block the assets of the director of the port and the head of Lebanese customs, along with five other individuals, according to Reuters.

The port's director-general, Hassam Kraytem, told CNN on Wednesday that he had been aware that the 2,750-tonne cargo of ammonium nitrate was dangerous, "but not to that extent." He confirmed that workers had been performing maintenance on the warehouse's door in the hours before the explosion - an account that aligns with previous reports that the initial fire was sparked by welding.

Lebanon's customs director, Badri Daher, told media that the port had written to court officials six times to ask for the cargo to be removed, and he claimed that the requests went unanswered. Lebanese journalist Riad Kobaissi alleged Thursday that Daher's claim was inaccurate, releasing public records that appeared to indicate that the requests had received a swift response.

Security officials in Cyprus have located and questioned the Russian businessman who owned the cargo ship Rhosus, which carried the consignment of ammonium nitrate to Beirut

During a 2013 voyage from Georgia to Mozambique, the Rhosus called in Beirut for repairs, and she was detained for port state control deficiencies. The vessel racked up debts at the pier and was placed under judicial arrest; ultimately the Rhosus, her crew and her cargo of ammonium nitrate were abandoned by the shipowner and the cargo owner. In 2014, port officials in Beirut moved the bulk ammonium nitrate ashore for safekeeping. The vessel's AIS signal has not been detected since mid-2014.

When the cargo detonated on Tuesday, it killed more than 130 people and destroyed most of the nearby waterfront. The blast was so large that it was noticed in Cyprus, 100 nautical miles to the northeast. Buildings within a wide radius of the site - including several of the city's hospitals - suffered extreme damage. The explosion even caused light damage at the city's airport, located five miles to the south.

Two of the dead were Filipino crewmembers aboard the cruise ship Orient Queen, which was moored about 400 yards to the east. The vessel took on a list towards the pier shortly after the accident, and by the following day she had capsized. Two seafarers aboard the freighter Mero Star - which was unloading wheat at the time of the explosion - also sustained injuries, according to Reuters. Many other vessels were in port at the time of the casualty, and the extent of further damage is not yet fully known.

Long before the explosion, Lebanon was mired in deep economic and political upheaval, and the disaster has accelerated calls for change, including the resignation of its top government leadership. Even while emergency search and rescue response efforts continued, protests began Thursday night at Beirut's Parliament Square, some 1,500 yards west of the blast's epicenter.

This news is a total 1803 time has been read
Tags: 16 Detained in Connection with Beirut Explosion