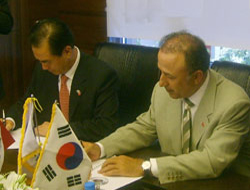 Ere?li Shipping Company which was established to carry the products of Ere?li and ?skenderun Iron and Steel Industries by 160 partners from Chamber of Shipping Members, offered two ships from Far East.

Signature Ceremony of the Ships was done at Chamber of Shipping. Signature Ceremony was signed by Ere?li Shipping C.O. Chairman of the Board Metin Kalkavan and the builder group Hanjin Group Vice President Mr. Chan Yong Ahn.

ice President of Hanjin Group Mr. Chan Yong Ahn who talked at the opening of the ceremony said:" We have been very happy that Turkish Ship-owners trust us by ordering these ships. We, as Hanjin Group, thank you for this behavior. The dry cargo ships that will be built, are scheduled to delivered in 2010 and we will deliver them on time. "

Chamber of Shipping President and Ere?li Shipping Chamber of the Board Metin Kalkavan said: "Ere?li Shipping is a great power in Turkish Maritime and it grows permanently." and he continued:" With these last ships ordered, tonnage capacity increased to more than half million tones."

The dry cargo ships, which have capacity of 175 thousand tones, and, are scheduled to be delivered at the second term of 2010, cost 161 million dollars.

-Metin Kalkavan- Chairman of the Boards of Directive (TURKON COMPANY)

-Suay Umut- Member of Board of Directive (DÜNYA SHIPPING)

-Pekin Baran- Member of Board of Directive (DEN?ZC?L?K A.?.)

-Faruk Miras- Member of Board of Directive (D?LER COMPANY)

-Erbil Özkaya- Member of Board of Directive (YASA COMPANY)

This news is a total 2104 time has been read