17 Rescued as Yacht Engulfed in Flames Sinks Off Italy 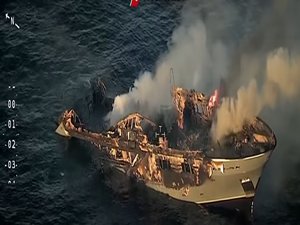 The Italian Coast Guard said it rescued 17 people from a yacht before it sank off the coast of Sardinia, Italy.

The incident took place Tuesday as the 155-foot vessel was sailing from Capri to Porto Cervo when it issued a distress signal at around 6 a.m.

The Coast Guard sent two helicopters to assist in the rescue. At least 17 passengers and crew members were rescued from a yacht in Italy that caught fire and eventually sank on August 25, the Italian Coast Guard said.

Video footage shows smoke clouds coming from the 155-foot yacht before it is eventually submerged in the water. The ship set sail from Capri, en route to Porto Cervo, Sardinia.

The yacht launched a distress message at 6 am, which was picked up by coast guards in Olbia, according to reports. T

wo “fast” search-and-rescue patrol boats and a helicopter then attended the rescue operation. According to local reports, the eight passengers were from Kazakhstan.

This news is a total 3109 time has been read
Tags: 17 Rescued as Yacht Engulfed in Flames Sinks Off Italy