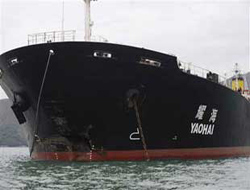 Eighteen Ukrainian sailors are feared dead after a tug capsized and sank in Hong Kong after a collision with a cargo vessel.

Eighteen Ukrainian sailors are feared dead after a tug capsized and sank in Hong Kong after a collision with a cargo vessel.

Salvors are working to attempt entry into the sunken ship, from which there have been no sounds or other indications of survivors amongst the crew trapped in the hull.

The Neftegaz 67 sank in 35 metres of water off Lantau Island on Saturday. Its hatches and deck are reportedly embedded in the sea floor, making rescue efforts difficult. The captain, who was among the seven crew rescued after the collision, has blamed the cargo vessel, the Yao Hai, for the incident, claiming it had not given his ship right of way.

The tug had been detained in Hong Kong in 2003 after port state control found its escape equipment and exits were deficient and that ship personnel did not know safety drills. It had not been detained since, however.

If the missing crew are confirmed dead, it would be Hong Kong"s worst maritime accident in decades.

This news is a total 1444 time has been read