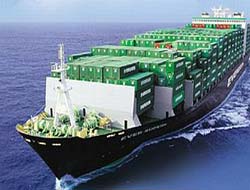 An Evergreen Marine container ship set sail last week as part of an ambitious project to measure and monitor the distribution of greenhouse gases in the Pacific Ocean.

The EVER ULTRA is the first commercial marine vessel equipped to measure marine hydrocarbon and halocarbon emissions as part of an international Pacific Greenhouse Gases Measurement project.

Taiwanese scientists at National Central University with the cooperation of Evergreen Marine Corp., the National Science Council, the Environmental Protection Administration and the University of Cambridge initiated the PGGM project in 2008.

The US$70 million 980-foot-long vessel 5364 TEU Ever Ultra, which departed Saturday from the newly built Taipei Port destined for the Persian Gulf, is the first of three Evergreen ships that will participate in the project, with the second scheduled to sail to the Atlantic on July 24.

Wang Kuo-ying, director of NCU's Center for Environmental Studies, said prior to the Ever Ultra's launch that the project would generate invaluable data from in-service container ships and aircraft, as opposed to fixed measurement stations.

"This is an unprecedented effort that will over the next 20 years observe the global distribution of greenhouse gases, which will put Taiwan's greenhouse gas observation on the same track as international studies," Wang said.

This news is a total 2339 time has been read