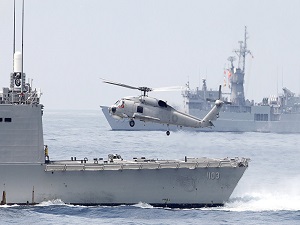 The vessels in question are ex-USS Taylor and ex-USS Gary, bought by Taiwan from the US in 2016. They have been renamed Ming Chuan and Feng Chia. The former US Navy Oliver Hazard Perry-class frigates were commissioned by Tsai Ing-wen, President of Taiwan.

As explained, the two frigates are expected to contribute to the navy’s goal to achieve full operational capability and ensure national security. “We want to send a clear and firm message from Taiwanese people to the international community that we will not concede one step in defending… Taiwan and protecting our free and democratic way of life,” Tsai Ing-wen said during her speech, reflecting on a growing threat from China.

Prior to their delivery to Taiwan in 2017, the frigates had their mechanical and electrical systems, as well as selected combat systems reactivated and tested. Additionally, Taiwan Navy crews received training on maintenance and operation of the FFG systems which included training in the classroom, on-the-job training, and underway operational exercises.

This news is a total 2676 time has been read
Tags: taiwan navy, taiwan, kaohsiung, frigate, cheng kung-class frigate, zuoying base