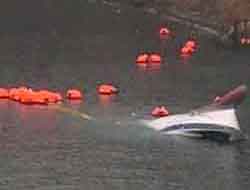 The Greek cruise ship Sea Diamond sank at dawn on Friday after it ran aground off the Aegean island of Santorini on Thursday.

The Greek cruise ship Sea Diamond sank at dawn on Friday after it ran aground off the Aegean island of Santorini on Thursday.

The 20-year old cruise ship, run by Louis Hellenic Cruise Lines, sank at the sea area of "Old Mines" of Athenios, Santorini's harbour, after water flooded its engine room and decks 2 and 3 during the night.

Special barriers have been placed around the sanken ship to avoid any oil spill from the vessels fuels, which are expected to begin leaking from fuel tanks within the next hours threatening Santorini's sea environment with devastating consequences.

Meanwhile, Merchant Marine Ministry officials said two French tourists were reported missing in the evacuation of the cruise ship, a 45-year-old Frenchman and his 16-year-old daughter.

The rest of the passengers (1,170), mostly Americans and Germans, and 390 crew of the ship were successfuly evacuated within a few hours after the ship run aground near the coast of Santorini. The "Aegean 2" ship arrived in the port of Piraeus on Friday morning transporting 296 passengers and 38 member of the crew. Louis Hellenic Cruises has sent another cruise ship "Perla" to Santorini to transport the remaining 1,170 passengers.

Sea Diamond was launched in April 2006, operating on a seven-day sea cruise from Piraeus to the Aegean islands.

Merchant Marine Minister Manolis Kefaloyiannis said that state mechanism responded perfectly in all levels and announced a thorough investigation into the accident.