20% of its largest shipyard sold 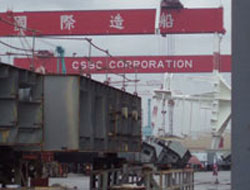 The Taiwanese government sold off nearly 20% of its largest shipyard, China Shipbuilding Corp, to institutional investors.

The Taiwanese government sold off nearly 20% of its largest shipyard.

The Taiwanese government sold off nearly 20% of its largest shipyard, China Shipbuilding Corp, to institutional investors on Thursday.

The initial public offering, which was oversubscribed by 1.5 times, saw 131.9m shares sold at an average price of NT$13.42. The number of shares sold is equivalent to 19.8% of the company.

A second round of share sales will begin Monday through to Wednesday when 87.9m shares will be made available to retails investors.

Next Friday, shipyard employees will have a chance to take a stake in their place of work when the government makes available 119.9m shares, or 18% of the company, at NT$13.31 per share.

The sale is the government"s fourth attempt to sell up to 55% of the company in which it once owned 99.4%. Previous efforts had been attempts to privately sell the shipyard in 2006 and 2007. At the time China Steel had expressed an interest but the auctions were invalidated because they had been unable to attract a minimum number of bidders as determined by Taiwanese law.

According to the CSBC prospectus, the proceeds of the IPO would be used in research and development for fuel-efficient and environment-friendly ships.

?They will also be used to update our existing equipment and provide intensive training for our employees,? chairman Cheng Wen-lon said. ?Our goal in privatising is to build CSBC into a world-class shipping brand, known for its design and manufacturing excellence.?

CSBC will begin trading on the Taiwan Stock Exchange on December 22.