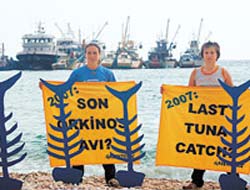 Environmental watchdog Greenpeace has warned that the survival of bluefin tuna in the Mediterranean is under threat and called for immediate action form the government.

Environmental watchdog Greenpeace has warned that the survival of bluefin tuna in the Mediterranean is under threat and called for immediate action form the government.

Campaigner Banu Dökmeciba?? noted that tuna stocks are essential for the Mediterranean region’s economy and culture, as well as for the sustainability of its marine ecosystems, and said that governments have failed to guarantee the survival of tuna stocks. “All boats should be called back to port, otherwise 2007 could be the last year for bluefin tuna in the Mediterranean,” she said. Dökmeciba?? called for an immediate formation of marine reserves to protect the Mediterranean marine ecosystem and to bolster the dwindling blue fin population.
The Greenpeace ship Rainbow Warrior sailed from Malta to the southern Mediterranean to document the blue fin tuna issue. The tuna fishing season in Turkey begins in May, however the fish is at risk of being all-but wiped out this year.

Requesting that the Ministry of Agriculture immediately launch a series of inspections and studies, Dökmeciba?? added: “Last year, members of the International Commission for the Conservation of Atlantic Tuna (ICCAT) failed to implement a program to recover the population of the bluefin tuna [in Turkish waters]. ICCAT experts warned that that only catches below 15,000 tons would allow the tuna population to start recovering. Last year the quota was set to 29,500 tons. Measures to prevent illegal cultivation were determined, but these will not come into effect until after this year’s fishing season. This will mean that bluefin tuna will be subject to plundering for another year.”

Bluefin tuna stocks in the northern part of Libya’s waters are currently not under threat, Dökmeciba?? said, adding they expect more than 200 vessels work this area, which has a capacity of 35,000 tons. Turkish fleets are expected to fish in the region between Cyprus and Mersin, a common breeding area for the fish.

This news is a total 592 time has been read