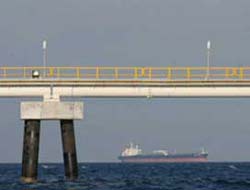 It was reported that 200th tanker was loaded and with a ceremony sent to Italy from Ceyhan Port (last station of Baku-Tbilisi-Ceyhan Pipeline).

It was reported that 200th tanker was loaded and with a ceremony sent to Italy from Ceyhan Port (last station of Baku-Tbilisi-Ceyhan Pipeline).

Bota? International Limited Company (BIL) General Director and Chairman of Board of Directors Salih Pa?ao?lu said: "In 6 ?ubat 2007, 100th tanker was loaded and this was celebrated with the join of Energy Minister Hilmi Güler in 15th April of 2007 and in 8th July 2007 200th tanker was loaded."

During the assay time in an hour 6 thousand 600 cubic meters crude oil was pumped, and reached to 1 million barrels capacity in a day.

BTC, which reached to 163.4 million barrels with the loading of 200th tanker, brought to treasure and BIL more than 100 million dollars.

Pa?ao?lu said: "Ceyhan Sea Terminal loaded 200 tankers so far, and 4 of these are Turkish flagged tankers."

This news is a total 1661 time has been read