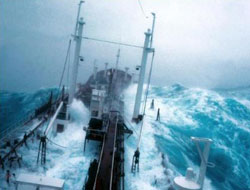 Twenty-two people drowned when a ferry capsized in the northeastern Philippines.

Twenty-two people drowned when a ferry capsized in the northeastern Philippines.

Police and villagers rescued 43 of the 100 on board and recovered 22 bodies, but another 34 are missing.

Huge waves were reported at the time of the accident and bad weather was hampering the search rescue efforts for the missing, he said.

Sea accidents are common in the Philippines

Sea accidents are common in the Philippine archipelago because of tropical storms, poorly maintained boats and weak enforcement of safety regulations.

In December 1987, the ferry Dona Paz sank after colliding with a fuel tanker, killing more than 4,341 people in the world's worst peacetime maritime disaster.

Over the weekend, the state weather bureau warned of a storm approaching from the Pacific with winds of up to 95 km/h.

In the next few days, it could become a typhoon before getting closer to the eastern Philippines, forecasters said.

This news is a total 597 time has been read