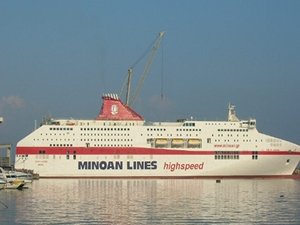 The body of an Afghan migrant was found Sunday in the vehicle deck of a ro/pax ferry in Ancona, Italy.

The cruise ferry Cruise Europa arrived in Ancona at about 1700 hours Sunday on a voyage from Patras, Greece. The victim's body was found within the vessel's vehicle hold, and it showed no signs of injury or violence, according to the local prosecutor's office. The enclosed hold can get as hot as 120 degrees Fahrenheit in summer weather, and Italian authorities believe it is likely that the victim asphyxiated while the vessel was under way, according to local media.

Italy's border police are leading an investigation into the cause of the casualty. It is not known whether the victim came aboard in a truck, and the drivers whose vehicles were in the hold did not report seeing him.

The 24-year-old migrant was identifiable because he was carrying a Greek refugee asylum application, according to InfoMigrants.

This news is a total 1929 time has been read
Tags: 24-Year-Old Migrant Found Dead in Vehicle Hold Aboard Ro/Pax Ferry