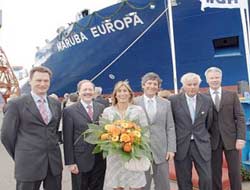 MARUBA EUROPA is the first of five vessels in the series.

MARUBA EUROPA is the first of five vessels in the series.

On September 8, the first of a series of five 2,700 TEU container ships was launched and christened MARUBA EUROPA in Kiel at HDW-Gaarden a company of ThyssenKrupp Marine Systems.

The launch was performed by Georgina H. Rodriguez Vazquez, the wife of Gustavo Rodriguez, CEO and president of the Maruba Group. The ship was ordered by GEBAB in Meerbusch and will be operated by the shipping line NSB Niederelbe Schiffahrtsgesellschaft mbH & Co. KG, Buxtehude.

The 2,700 TEU ships are a success as such within the shipbuilding group of ThyssenKrupp Marine Systems and, in addition to HDW-Gaarden, Blohm + Voss (2 ships) and Emder Nordseewerke (8 ships) have contributed to the success.

The container ship has been built in compliance with the rules and regulations of Germanischer Lloyd and the main characteristics are as follows:

This news is a total 2327 time has been read