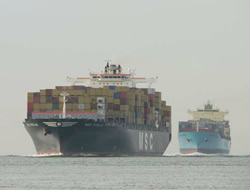 The shipping alliance between the two shipping giants Maersk Line and Mediterranean Shipping Co., dubbed the 2M, complies with Chinese rules and is operationally ready to launch.
“We’ve submitted our application and have thus fulfilled the requirements, but the Chinese regulators can of course at any given moment launch a study of the agreement,” Skou said.
“But we do believe that our VSA is fully comparable to other collaborations of similar scope.”
However, the 2M alliance might be facing an extended review period in the United States of America, as the U.S. Federal Maritime Commission examines details of the alliance that were submitted last week.
The Commission will likely ask for additional information during the review which relate to the time-frame of the tie-up and the vessels’ size.
The 45-day process might be stopped while Commissioner William Doyle submits the questions to the shipping companies about their proposed agreement.
Without the announced interruption, 2M could have been approved in the US on October 11, which according to industry experts is looking more and more unrealistic. The regulations state that once the 45-day process is stopped, it can not be continued, but rather a new 45-day review period starts.
The 2M alliance will also be featured on the agenda of the upcoming annual US-China maritime-agreement consultation in Shanghai in November, where the US representatives hope to learn of China’s outlook on the proposed alliance, as well as to find out more about the review process.
Last week AP Moller-Maersk chief executive Nils Andersen stated that the 2M partners ”did not need antitrust clearance in China,” on the basis that the new agreement is nothing like the rejected P3 alliance.
U.S. Federal Maritime Commissioner Richard Lidinsky reportedly said in an interview to the Journal of Commerce that ”Maersk Line and Mediterranean Shipping Co. appear to have the same confidence that Chinese regulators will approve their “2M” vessel-sharing agreement as they did before China’s rejection of the P3 Network.”
“It’s deja vu all over again,” said Lidinsky.
“It’s like they didn’t learn anything in dealing with China; you have to deal with the government with respect.”
http://turkishmaritime.com.tr
This news is a total 5343 time has been read