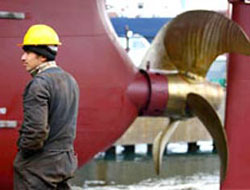 Three more shipyards at Tuzla in Turkey have been closed because of poor safety records.

Three more shipyards at Tuzla in Turkey have been closed because of poor safety records.

Inspectors of Turkey"s labour and security ministry decided on Monday to close the yards in the Istanbul industrial complex, where 21 workers have died in the last nine months.

Saban Kasap-Sahin Teknecilik, Mengi-Yay Yachting Company and GESA Ship Corp were the yards closed temporarily, until they can show that standards have improved.

The sub-contracting system and non-compliance with occupational safety regulations are seen as the major causes of the deaths in Tuzla.

This is not the first time a closure has been implemented. In May Selah Shipyard was shut after two workers were killed there.

This news is a total 1847 time has been read