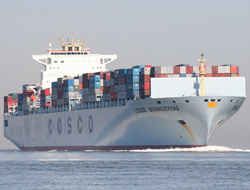 The contracts were worth $298.7m, according to Singapore-listed Cosco Corp, which owns a 51% stake in Cosco Shipyard Group. CSG has six shipyards in China including Cosco Zhoushan. Work was yet to be started on any of the eight cancelled newbuildings.

Cosco Corp said there had been ?numerous discussions and negotiations? with the shipowners over the contracts.

?In the circumstances, they have decided that the most viable solution for them mutually would be to vary or cancel the shipbuilding contracts,? the Singapore company said.

For the cancelled newbuildings CSG will refund all installments made by the China Cosco companies.

In turn, China Cosco has agreed to not to pursue any claims for late delivery of vessels. Cosco officials could not be reached for comment.

Cosco Group chairman Wei Jiafu has been bullish about the prospects for dry bulk shipping since the market started to rebound early this year saying he expected the resurgence of freight rates to be sustainable in the second half of the year.

The newbuildings orders cancelled at CSG were placed in December 2006, prior to Cosco Corp revealing the shipyard group"s move into shipbuilding in the first half of 2007.

The cancellations by China Cosco add to CSG"s newbuilding contract woes with over one third of its orderbook now either delayed or cancelled. In total, shipowners have delayed delivery of 32 vessels at its yards and cancelled 13 newbuildings.

The move by CSG into shipbuilding spearheaded by Cosco Corp was heralded by investors as it rapidly built up an orderbook of 100 newbuildings from both international shipowners and other Cosco companies.

Cosco Corp"s shares reached a high of S$8 in November 2007 before plunging sharply as the bad news began to mount. On Wednesday the company"s shares closed at S$1.22.

The cancellations will hit not only Cosco Corp but also Singapore shipyard group Sembcorp Marine, which owns a 30% stake in CSG.

This news is a total 4086 time has been read