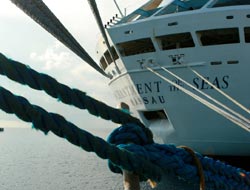 Idled ocean container capacity has reached a record 800,000 TEUs with 303 ships at anchor.

Idled ocean container capacity has reached a record 800,000 TEUs with 303 ships at anchor.

Idled ocean container capacity has reached a record 800,000 TEUs with 303 ships at anchor as carriers cut or consolidate services on key east-west routes amid declining traffic and freight rates. The unemployed figure represents 6.5 percent of the world fleet, twice the 3.2 percent recorded in the depth of the 2002 bear market, according to AXS-Alphaliner, a Paris-based consultant. That figure was calculated before Senator Lines announced its shutdown.

The rising number of unemployed vessels is reflected in the 15 percent reduction in total capacity on offer on the three main east-west routes over the six months to Feb. 1, according to Alphaliner. Capacity has fallen from a weekly 916,000 TEUs to 780,000 TEUs.

The Far East-Europe trade has seen the deepest cuts, with capacity tumbling 21 percent to 333,000 TEUs from 418,000 TEUs. The closure of several service loops in December and January alone removed 50,000 TEUs of weekly capacity, which is now down to its lowest level since May 2007.