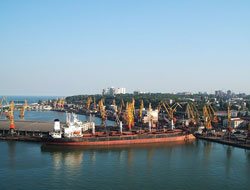 Odessa Commercial Sea Port is one of the largest ports of the Black-Azov Sea Basin. Technical facilities of the port allow to process more than 14 million tons of dry cargoes and 14 million tons of oil products annually Port processes about 30 million tons of cargoes per year, among them more 15 million tons of liquid cargoes, including oil and crude oil, condensed gas and vegetable oil. There are eight handling complexes for dry cargoes processing, passenger complex, oil and container terminals, complex for technical and vegetable oil processing on the 133 hectares of the port territory. The modern container terminal with annual capacity more than 500,000 TEU is also to your services.

Special (free) Economic Zone "Porto-Franko" is situated on the Quarantine pier. 54 protected berths with total length of quay line more than 9,000 m allow to accept the vessels with cargo carrying capacity up to 100,000 tonnes, up to 300 m length and up to 13.0 m draft.