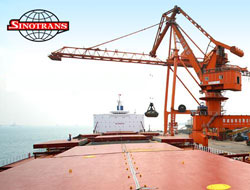 Chinese shipowner Sinotrans Shipping Ltd said on Tuesday it would invest a total of $388 million in new ships over the next three years.

Chinese shipowner Sinotrans Shipping Ltd said on Tuesday it would invest a total of $388 million in new ships over the next three years.

Chinese shipowner Sinotrans Shipping Ltd said on Tuesday it would invest a total of $388 million in new ships over the next three years in anticipation of a better outlook for 2009. "Given the improving market sentiment, the company has no plan to further dlay or cancel its orders," Tian Zhongshan, executive director and general manager, told a news conference.

The Baltic Exchange's main sea freight index .BADI plunged more than 90 percent in 2008 before a gradual recovery kicked in in February. The index had bounced back to 2,262 points as of Tuesday.

Total capacity of the firm will rise to 3.3 million deadweight tonnes (dwt) by 2011 from 1.7 million dwt at the end of 2008, it said in presentation materials.

"The dry bulk shipping industry has been improving since the beginning of this year, especially after the Chinese New Year," Tian said.

Sinotrans weathered a market downturn and managed to post 13.6 percent year-on-year growth in charter hire income in the fourth quarter.

Sinotrans shares jumped more than 15 percent in morning trade on Tuesday after the dry bulk vessel charter firm said it more than doubled its net profit in 2008 to $347.1 million from $140.9 million in 2007, thanks to strong demand for bulk ships in the first three quarters. The stock gave up some of the gains by mid-afternoon, trading at HK$1.90, up about 14 percent.

"There is a need to reorganise the businesses within the two groups," Pan Deyuan, Sinotrans Shipping non-executive director, told reporters.

But he added that given Sinotrans and the Yangtze groups have five listed units, including Hong Kong-listed Sinotrans Shipping and Sinotrans Ltd, consolidating some of the businesses may need to wait until equity and credit market conditions improved.

This news is a total 1273 time has been read