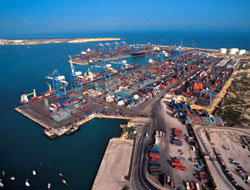 Malta Freeport Terminals took delivery of four ship-to-shore cranes that are among the largest container cranes in the world.

Malta Freeport Terminals took delivery of four ship-to-shore cranes that are among the largest container cranes in the world.

Four super post-Panamax cranes among largest in the world Malta Freeport Terminals, a major Mediterranean transshipment hub, took delivery of four ship-to-shore cranes that are among the largest container cranes in the world. The cranes, which cost $34.9 million were installed on the north berth of Terminal two, according to a report on the Web site of Maltese television station, di-ve.

The super post-Panamax cranes can lift 80 metric tons and handle ships that carry 23 containers across. Freeport, which is operated by CMA CGM, is one of the first terminals in Europe to invest in tandem cranes.

With the delivery of the new cranes, Malta Freeport Terminals can effectively handle containerships of over 13,500 TEUs at its facilities.

When the new cranes are placed in full operation by the end of August, Malta Freeport Terminals will be equipped with 23 ship-to-shore cranes, of which 19 are super post-Panamax and four post-Panamax.

The terminal company committed to undertake an extensive expansion program targeting the port"s infrastructure and equipment as a condition of the extension of the concession agreement in February 2008 from 30 years to 65 years.

From the time the terminal was turned over to a private operator in October 2004 to the end of last year, Malta Freeport Terminals has invested $131.4 million and it plans to invest an additional $207 million.

The container volume handled by Malta Freeport increased by 59.6 per cent since 2004 to reach 2.33 million TEUs last year. This represented among the highest percentage increases in traffic volume in the Mediterranean transshipment market.

Despite the international recession, during the first six months of this year, Malta Freeport Terminals managed to maintain last year"s traffic volumes and a similar amount of throughput level is expected this year, significant given that other Mediterranean transshipment ports have experienced a decrease of around 20 per cent in their throughput levels in the same period this year.

The terminal company expects to exceed the 3 million-TEU mark by 2011.

This news is a total 3975 time has been read