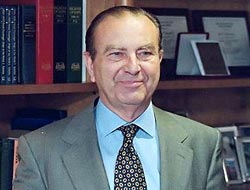 Greek shipowner Mr. Panagopoulos was kidnapped by three armed with AK-47 men yesterday morning, as he was leaving his home.

Greek shipowner Mr. Panagopoulos was kidnapped by three armed with AK-47 men yesterday morning, as he was leaving his home.

Shipping magnate Pericles Panagopoulos and his family are faced with the biggest challenge of their lives. Mr. Panagopoulos was kidnapped by three armed with AK-47 men yesterday morning, as he was leaving his home in the district of Kavouri, just outside Athens. By late afternoon, his kidnappers finally made contact and reportedly demanded a ransom of 40 million euros for his release. One major issue though could be the 74 year-old ship owner"s fragile health, since he requires daily medication and his health needs close monitoring and attention. The attack itself proved successful and was thoroughly planned. After seizing the magnate and his driver, the armed men drove for a few kilometers, before releasing, but tying up to a tree the driver. Then, they burned both of the escape vehicles and left. The driver of Mr. Panagopoulos managed to set himself free and immediately seek for help. In his statement to the police he reportedly said that the attackers reassured that all this was for money and that the ship owner wouldn"t be hurt by any means.

The abduction comes a week after an attack on the Culture Ministry in central Athens, in which a policeman was seriously wounded. That attack was attributed to a shadowy group known as Revolutionary Struggle, which seems to be trying to emulate the notorious 17 November organization, responsible for terror acts over several decades.

Police launched a manhunt today but although they played down terrorism in favour of purely criminal motivation a spokesman said that the anti-terrorist service was closely monitoring the case.

In June, the chief executive of aluminium company Alumil and chairman of the Federation of Industries in the northern city of Thessaloniki, George Milonas, was also kidnapped before being released two weeks later after a ransom was paid.

Police arrested Greece's most wanted fugitive, Vassilis Palaiokostas, in August for Milonas' kidnapping. He escaped from prison in 2006, where he was serving a sentence for robbery and kidnapping. Last month, a well-known Athens doctor was also kidnapped but has yet to be found. It is the first time a shipping tycoon has been a kidnap victim since 1996 when Yannis Peratikos, a shipowner, was gunned down by the 17 November terror group, which was eradicated in 2002 after a 27-year career of political murder and violence.

Mr. Panagopoulos set up Royal Cruise Line in 1971, when mass tourism to Greece was just beginning.

Eighteen years later he sold the line at a handsome profit and in 1992 set up Attica Enterprises, now the country"s largest ferry company. He was hailed as a pioneer when he conceived the idea of linking Hellas and Italy through the use of high-speed ferries, featuring cruise-liner comforts. The spin-off was named SuperFast Ferries and proved a huge success. In 2004 Mr Panagopoulos acquired Blue Star Ferries, a leading island-hopping line. As the head of the passenger ship-owners" association, he was in a position to urge for higher fares and more efficient ferry routing in a heavily state-regulated market.

In January 2008 he sold his passenger shipping activities -Attica Holdings and Superstar Ferries- for 286 million euros to the investment company Marfin Investment Group, led by Mr. Andreas Vgenopoulos, but supported by Arab funds.

Mr. Panagoupolos is also active in ocean-going shipping, as he owns Magna Maritime, a company which operates a fleet of 2 panamax and 2 supramax vessels as well as 2 Ro-Ro's.

From his behalf, Mr. Apostolos Ventouris, now leading the passenger ship-owners" association, released a written statement declaring that he is shocked for the abduction of his friend and will do whatever needed for Mr. Panagopoulos" safe return to his beloved ones. ?All members of the Association are in shock and are closely monitoring the situation. We plead for the immediate solution to this event? the statement concluded.

Hellenic Shipping News would like to add its voice to those who wish all well to Mr. Panagopoulos and his safe return to his family and friends as soon as possible.

This news is a total 1265 time has been read