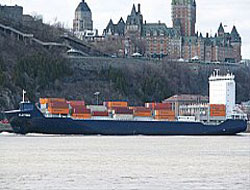 The two vessels are due for delivery in 2010 and 2011 and are part of a series of five 5,100 teu containerships ordered by Hamburger Lloyd at Jiangnan Changxing. The other three will be delivered in 2009.

Hamburger Lloyd already has a pair of 4,600 teu newbuildings on order at Shanghai Shipyard to be delivered in 2011.

?We are thinking about changing the design,? said managing director Hauke Pane.

?The main reason for the change is not the crisis but the fact that the new design is more attractive as the vessels can hold more boxes.?

The 4,600 teu ships have a beam of 37 m compared with 32.2 m on the higher-capacity vessels, which makes them too wide for the Panama Canal.

He added that when the last vessel will be delivered in 2011 it will be only three years before the completion of the canal"s expansion.

None of the total of seven containerships on order by Hamburger Lloyd has a fixed charter yet. Mr Pane is confident that the vessels to be delivered in 2009 will find employment.

Hamburger Lloyd will keep the vessels for the time being on its own books as it is nearly impossible to refinance them by KG funds without a long-term charter.

?We will think about a KG fund when market conditions are better,? Mr Pane said.

Hamburger Lloyd was established in 2007 as part of the financing group Hansa Hamburg Shipping and focuses on vessels between 1,000 teu-5,000 teu.

This news is a total 7842 time has been read