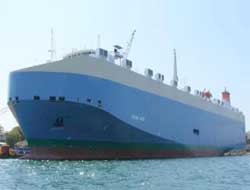 The delivery & acceptance documents were signed by Mr. Petar Car, Sales, Project & Calculation Manager at Uljanik Shipyard and Mr. Rami Ungar – the shipowner, and immediately after the signing there took place the ship’s naming ceremony.

First Lady of the ceremony was Mrs. Marija Hrvatin who was accompanied by her husband Mr. Ivan Jakovčić – the Istrian County’s Head.

By cutting the rope and breaking the bottle of champagne, she named the ship, wishing her and the crew a happy and safe sailing and expressed satisfaction that the ship was named after Istra. Mrs. Hrvatin did not miss the chance either to thank the shipowner Mr. Rami Ungar on the honour done to her and congratulated Uljanik’s shipbuilders.

At the ceremony there were present, beside the Istrian County Head Mr. Ivan Jakovčić, also the shipowner Mr. Rami Ungar with his wife Yael, Mr. Anton Brajković – ULJANIK Group Board President and Mr. Marinko Brgić – the Board President of ULJANIK Shipyard with his closest collaborators.

The attendees were addressed also by Mr. Silvan Kranjc – Member of the Board of the Shipyard and Production Manager who stressed that Uljanik was privileged by the choice of the name and the godmother of the ship, and, Uljanik people could not have wished a more beautiful name for the ship that they have built. Mr. Kranjc thanked the supervisors of the company Ray Car Carriers and the representatives of the Classification Society Det Norske Veritas as well Uljanik’s workers and subcontractors on the successfully accomplished work.

After the naming ceremony the Godmother, the shipowner and the guests accompanied by the Shipyard’s representatives visited the ship and learnt about her principal characteristics.

The Contract for Hull No. 467 ISTRA ACE was signed in November 2003, the keel was laid on 23rd December, 2006, and the ship was launched on 12th May, 2007. In May 2005 a contract for building two additional car carriers was signed with the buyer Ray Car Carriers Ltd. and last year another one, so that the earlier contracted series was increased, totalling nine ships.

As a result, the company Ray Car Carriers Ltd., after the Group Grimaldi, is the second biggest Buyer of Uljanik’s ships in recent times. The Ship Programme for Ray Shipping will be accomplished by the year 2009.

Straight after the ceremony the ship sailed for Greece and after that for Japan to undertake her first working task.

This news is a total 1199 time has been read