5,000 Artifacts from RMS Titanic are Up for Sale 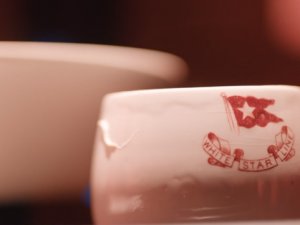 The owner of the largest collection of artifacts from the wreck of the RMS Titanic, Premier Exhibitions, is closing in on the sale of its assets in a bankruptcy proceeding.

Premier holds more than 5,000 objects from the wreck site, collected over the span of seven expeditions and 25 years of salvage efforts. A 2007 appraisal valued the collection at nearly $190 million.

In 2012, auction house Guernsey's put Premier's artifacts up for sale as one block, the first and only offering of its kind. "We are proud of what we have accomplished as salvor-in-possession of the wreck site and we believe we have faithfully honored the legacy of those who were lost. After all of these efforts, we have determined that the time has come for us to transfer ownership of this collection to a steward who is able to continue our efforts and will preserve and honor her legacy," said Mark Sellers, Premier's then-chairman at a 2012 press conference.

However, the sale did not ultimately through. Premier tried again in 2016, but could not find a buyer interested in taking the full lot, Guernsey's president Arlan Ettinger told Bloomberg in a recent interview. Covenants imposed by an American admiralty court restrict the terms of sale, and much of the collection must remain intact and well-preserved.

Premier filed for bankruptcy in 2016, and it is now seeking to sell its Titanic-related business as a going concern, collection and all. In a filing in June, Premier said that after an extensive search for a buyer, it has arranged to sell its holdings to an entity owned by Hong Kong-based PacBridge Capital Partners, U.S. private equity firm Apollo Global Management, New York-based Alta Fundamental Advisers and Premier's secured lenders. The sale will be conducted at auction, allowing other parties to compete. Other bidders currently include a group of British museums and a privately-owned exhibition company based in Branson, Missouri. The current offer stands at nearly $20 million.

This news is a total 670 time has been read
Tags: 000 Artifacts from RMS Titanic are Up for Sale