5,000 sailors aboard USS Theodore Roosevelt to be tested for COVID-19 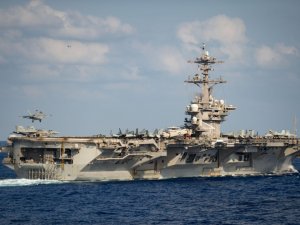 About 5,000 crew on board the US Navy’s aircraft carrier USS Theodore Roosevelt in the Pacific will be tested for coronavirus, a navy official said.

The decision comes after additional positive cases of COVID-19 have been discovered aboard the warship.

“We are taking this threat very seriously and are working quickly to identify and isolate positive cases while preventing further spread of the virus aboard the ship,” Admiral Michael M. Gilday, the Chief of Naval Operations, said in a statement.

“Our medical team aboard USS Theodore Roosevelt is performing testing for the crew consistent with CDC guidelines, and we are working to increase the rate of testing as much as possible. Immediate priority will be symptomatic sailors, those in close contact with sailors who have tested positive already, and essential watch standers,” Gilday added.

Deep cleaning of the ship’s spaces is also ongoing.

Earlier this week, three sailors aboard the aircraft carrier were diagnosed with COVID-19 and evacuated from the ship. Currently, there are more than 20 coronavirus cases among the ship’s crew.

“The sailors who have been flown off the ship are currently doing fine. None of them have been required to be hospitalized because their symptoms are very mild… So they’re in quarantine now on Guam,” Thomas B. Modly, Acting Secretary of the US Navy informed in a separate statement.

Modly also pointed out that the ship is operationally capable and can do its mission if required to do so.

USS Theodore Roosevelt is in Guam on a previously-scheduled port visit. The resources at the US naval medical facilities in Guam will allow the navy to more effectively test, isolate, and if necessary treat sailors.

“We expect additional positive tests, and those sailors who test positive will be transported to the U.S. Naval Hospital Guam for further evaluation and treatment as necessary.”

During the port visit, base access will be limited to the pier for Roosevelt’s sailors. No base or regional personnel will access the pier, according to Gilday.

This news is a total 278 time has been read
Tags: coronavirus, US Navy, USS Theodore Roosevelt.