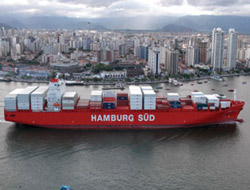 The "Rio Blanco" was christened at Burchardkai in the Port of Hamburg.

The "Rio Blanco" was christened at Burchardkai in the Port of Hamburg.

Yesterday the "Rio Blanco" was christened at Burchardkai in the Port of Hamburg. This is the fourth new vessel in a series totalling six container ships of identical design for Hamburg Süd. All of them have a slot capacity of 5,900 TEU, making them the largest vessels in the shipping group's fleet. The naming ceremony for the "Rio Blanco" was performed by Nina-Maria Oetker, wife of Dr. h.c. August Oetker, General Partner of Dr. August Oetker KG and Chairman of the Advisory Board of Hamburg Süd. After its christening the "Rio Blanco" will continue to operate in the shipping group's Europe-South America East Coast service, where it has been deployed since June 2009.

By the end of the year the remaining two new vessels "Rio Bravo" (which was delivered last week) and "Rio Madeira" (which is still under construction) are also to be phased into this service. They will replace the "Monte" ships (5,500 TEU) currently employed there, which will then operate in Hamburg Süd's Asia - South Africa/South America East Coast service. The "Rio Blanco" is named after a river in the region of Valparaíso in central Chile. Among the many guests were also 18 children from the SOS-Kinderdorf Harksheide near Hamburg. They had come to the ceremony at the personal invitation of Dr. h.c. August Oetker, who wanted to offer a very special experience to the six to seventeen year-olds. Similar invitations had also been issued on other occasions as Dr. Oetker had assumed a sponsorship for SOS-Kinderdorf e.V. in February 2007.

This news is a total 3788 time has been read