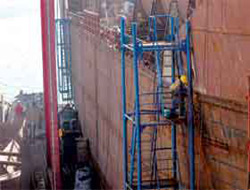 Poor workplace safety resulting in deaths was cited as the reason for the partial closure of six shipyards in Tuzla by the Labor Ministry.

Poor workplace safety resulting in deaths was cited as the reason for the partial closure of six shipyards in Tuzla by the Labor Ministry.

The Labor Ministry's investigation into worker deaths in the shipyards of Istanbul's Tuzla region resulted in the partial closure of six shipyards yesterday.

According to a statement by the ministry, the inspection came as a result of the rise in the frequency of worker deaths since 2002 when the workload increased. The ministry said an inspection between Sep. 1, 2006 and Jan. 31, 2007 found 1,061 violations in workplaces in Tuzla.

The Social Security Agency was alerted about discrepancies in the records of 25 companies, whereas 14 were suspected of fraud and reported to the tax authorities, according to the ministry.

It also said a new inspection was being carried out since Feb. 20 and has led to the partial closure of six shipyards thus far due to safety concerns.

?Despite these measures, the deaths of workers continued. The fact that some of the deaths are not even investigated due to deals between the families and the businesses without the knowledge of the prosecutor's office is another aspect of the issue that needs investigating,? the ministry said.

?As a ministry, we are limited to investigating cases resulting from alerts from businesses or complaints from families,? it said.

The death toll in Tuzla's shipyards has reached 36, with unions arguing that most could have been prevented if certain safety measures were taken.

Parliament has also established a commission to investigate the deaths in Tuzla's shipyards.

This news is a total 1536 time has been read