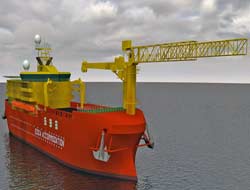 Edda Accommodation has placed an order with Astillero Barrera in Vigo, Spain for the world's largest purpose built offshore accommodation and service vessel.

Edda Accommodation has placed an order with Astillero Barrera in Vigo, Spain for the world's largest purpose built offshore accommodation and service vessel.

Edda Accommodation is part of Norway's Ostensjo Group. Ostensjo Rederi AS has been providing offshore accommodations since 2004 using the PSV Edda Fjord--including providing 450 beds for operations on BP's Thunderhorse platform in US Gulf of Mexico

Designed by Vik-Sandvik, the new purpose built vessel will provide for a total of 600 personnel. It will be delivered at the end of 2009.

The vessel's dynamic positioning system (DP 3) and the 5 Voith Schneider propellers will provide a precise and stable position, resulting in low fuel consumption compared to other propulsion systems.

The 130 m long x 27 m breadth vessel will be equipped with a telescopic gangway installed on the 1,400 sq.m deck with one heave compensated knuckle boom crane and two marine deck cranes. The gangway will provide safe passage for personnel from the vessel to offshore installation.

The cabins and offices on board are of executive standard with additional recreation areas, such as fitness rooms, sauna, swimming pool and cinema.

The new vessel will be particularly suitable for operations in Gulf of Mexico, West Africa and South East Asia, but also in more exposed areas such as the North Sea, Canada, and the Northern part of the Pacific Ocean.

Three of the propellers will be at the stern and two in the bow providing a sailing speed of approximately 12.5 knots.

With its DP3 system, the new vessel offers the most advanced technology in terms of "Dynamic Positioning" currently available.

Voith Turbo is not only supplying Voith Schneider Propellers with perfectly suited fast control times, but also the roll stabilization system, enabling safe use of heave-compensated telescopic gangway even in rough seas.