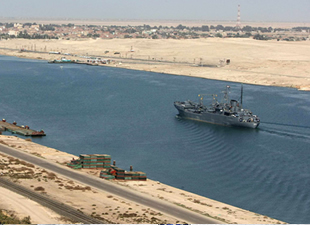 The project of the new 72-kilometer long canal was launched in August 2013 and aims to increase shipping traffic.

Water began to flow for 400 meters into the under-construction Suez Canal bifurcation after 67.5 percent of dredging works have been finalized, Chief of Staff of the Army’s Engineering Authority and supervisor of the project Major General Kamel el-Wazeer was quoted as saying.

The project of the new 72-kilometer long canal was launched in August 2013 and aims to increase shipping traffic.

The timeline of the whole project was scheduled by President Abdel Fatah al-Sisi to end within one year instead of the previously scheduled 3–year.

Sisi has issued a presidential decree on Tuesday to renew the tenure of Lt. Gen. Mohab Mamish as chairman of the Suez Canal Authority for another year starting from January 1, 2015. Mamish is also the executive head of the ongoing Suez Canal Corridor Development Project, part of the comprehensive Suez Canal Axis Project that was launched on August 15, 2014. It aims at boosting Egypt’s economy and increasing investments through establishing a logistics hub and trade zone in the strategic area.

This news is a total 2880 time has been read
Tags: Suez Canal, Kamel el-Wazeer, 400 meters