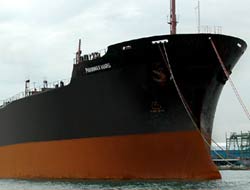 The Singapore-listed company has sold the 28-year old, 62,212dwt Panamax Mars for $7m. The shipowner said that proceeds from the sale would go towards working capital or other acquisitions.

This refers to the SGXNET Announcement made on 6 January 2009 (the ?Previous Announcement?) by the Company on the disposal of MV Panamax Mars (the ?Vessel?) for a consideration of US$7,000,000 (the ?Consideration?).

Unless otherwise defined, all capitalised terms used herein are as defined in the Previous Announcement.

The Company wishes to clarify that the Consideration for the Vessel is to be received by Panamax Mars Marine in cash by installments, and title of the Vessel will be transferred to the Buyer upon the receipt by Panamax Mars Marine of US$7,000,000 in full. The Consideration for the Vessel was arrived at on a willing buyer, willing seller basis, taking into account, inter alia, recent transactions for the sale and purchase of vessels of similar type and age.

This news is a total 1230 time has been read