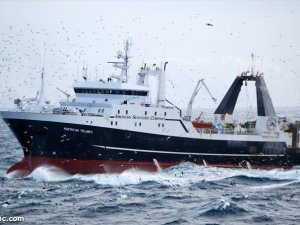 A total of 85 crew members have tested positive for COVID-19 on an Alaskan factory trawler operating in the Gulf of Alaska.

American Seafoods reports that an additional 79 crew members on board is FV American Triumph have tested positive for the virus after an initial six people had reported COVID-19 symptoms and tested positive.

At this time, all 119-persons on board the vessel have been screened. The crew members who tested negative will be relocated to Anchorage to isolate and quarantine.

The American Triumph has been at sea on June 27 when it departed Washington State and headed to Alaska to fish for wild Alaska pollock. The company said the shipboard outbreak comes despite a 14-day quarantine and passing all public health protocols prior its crew boarding the vessel.

“We are moving expeditiously to relocate our crew and get them the care they need,” said American Seafoods CEO Mikel Durham. “I want to thank the Illiuliuk Family and Health Services, the City of Unalaska Unified Command, and the public health and critical infrastructure professionals in Alaska who provided us with support and clear guidance.”

Seattle and Dutch Harbor-based American Seafoods is one of the largest seafood companies in North America, operating six vessels in the North Pacific Ocean and the Bering Sea.

This news is a total 2048 time has been read
Tags: commercial fishing, coronavirus