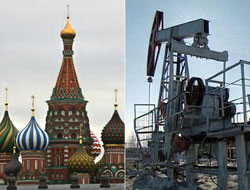 The Russian government has vowed to provide $9 billion to the four largest oil and gas companies to refinance their foreign debt, a Russian business daily reported on Tuesday.

The Russian government has vowed to provide $9 billion to the four largest oil and gas companies to refinance their foreign debt, a Russian business daily reported on Tuesday.

State oil company Rosneft will receive $4.2 billion of the sum. According to Kommersant, the pledge was made on Saturday during a meeting between oil and gas company representatives and Deputy Prime Minister Igor Sechin, who oversees the energy sector.

The state earlier granted the oil producers an estimated $5.5 billion in tax breaks.

On September 24, the four oil and gas majors, which account for 70% of Russian oil and 90% of gas production, sent Prime Minister Vladimir Putin a letter asking for a total of $80 billion to pay off their foreign debts and finance strategic projects.

Putin said on Friday the government would disburse up to $50 billion for companies to refinance their foreign debt.

He also said on Monday that companies should be offered alternative debt refinancing loans as a way of "saving Russian enterprises from being sold off at rock-bottom prices, which do not reflect their true value."

Russia's financial system has been rocked by a global credit crunch that started in the U.S. and quickly spread to Asia and Europe leading to record losses on Russia's financial markets, rising interest rates and a liquidity shortage.

This news is a total 1339 time has been read