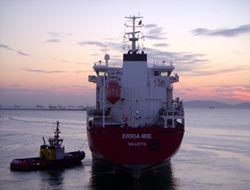 The expansion continues, now with a fleet marked by increasingly greater weight on ships in commercial management, which will limit the risks of the shipping company.

Erria's speciality is chemical tankers that constitute 75 percent of the fleet. The last fourth is feeder ships.

This news is a total 3317 time has been read