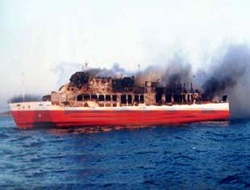 Malaysian officials say salvors have managed to board a burning Formasa Plastics product tanker in the Malacca Strait, but nine seafarers remain missing.

Sixteen crew were able escape to as a series of explosions rocked the tanker carrying a 58,000 tonne cargo of naptha, but nine others remain missing.

Malaysia Marine Department director general Ahmad Bin Othman told as of early afternoon today the tanker remained on fire. However he said salvage crews had managed to board the vessel and were trying to bring the blaze under control.

Capt Ahmad said the only one tank on the vessel had caught fire, and that the fire was now confined to the engine room. He was however unable to say how long it would take to put out the blaze.

The Malaysian authorities said there was no major pollution and the burning vessel was not a threat to shipping traffic in one of the world"s busiest waterways.

?There is no major pollution at the moment,? Capt Ahmad said.

He explained the affected cargo had burned off and evaporated in the explosions and fire onboard the tanker. An industry source agreed as a highly volatile cargo naptha would largely evaporate in such incident.

Capt Ahmad said the tanker was outside of the Malacca Strait traffic separation scheme and as salvage crews had been able to board the vessel he believed it was under control.

The product tanker was stable enough to allow it to be towed back into towards the coast he said.

Industry executives though raised concerns that with a volatile cargo like naptha the fire could spread to other tanks causing the vessel to sink in the Malacca Strait.

?The burning hull of the vessel drifting in a key waterway could cause a major hazard to shipping. If the vessel sinks at a critical point in the traffic separation scheme it could block southbound traffic in one of the world"s busiest waterways,? Nippon Maritime Centre marine manager Mathew Mathai said.

"A passing container ship assisted in rescuing the crew members," he said.

Some of the seafarers were able to escape in liferafts while others jumped overboard to escape the flames.

The 16 rescued crew members were said to have suffered minor injuries and were taken to a hospital in Port Dickson.

Malaysian newswire Bernama quoted the tanker's captain, Jiang Han Cheng, as saying the vessel was heading to Singapore en route to South Korea when it collided with the British-registered bulk carrier.

The crew of the bulk carrier, which suffered minor damage, are reported to be safe.

This news is a total 4398 time has been read