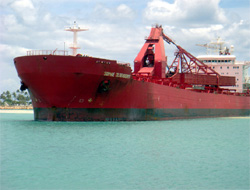 Polaris Minerals Corporation today announced that a commercial agreement, benefitting both parties, has been reached. The agreement includes extending the Company's first shipping contract by five years, to now expire in July 2022 and delaying the commencement of the second contract until the beginning of 2014.

CSL International is the exclusive shipper of sand and gravel from the Polaris majority-owned Orca Quarry situated near Port McNeill on Vancouver Island, British Columbia. During 2008, the quarry's first full year of production, CSL's self-discharging Panamax vessels carried 2.0 million tons of Orca products, the majority of which were shipped to Northern California.

Herb Wilson, President and CEO, Polaris Minerals Corporation, said: "This agreement reflects a cooperative approach to the adjustment of commitments recognizing that since 2006 the demand for construction aggregate in California has been significantly reduced by the economic recession. We now believe that action taken by the Federal and California State Governments will gradually begin to positively impact construction aggregate demand and we are pressing ahead with plans for additional aggregate receiving terminals in North America in order to fulfill the business plan". He added: "CSL has been fully involved in the underlying assumptions which have led to the revised growth timeframe and flexibility exists to bring forward shipping capacity should future market conditions warrant".

Polaris Minerals Corporation is exclusively focused on the development of quarries and the production of construction aggregates on Vancouver Island, British Columbia, for marine transport to urban markets on the west coast of North America to meet growing local supply deficits. In 2007, Polaris began shipping sand and gravel from the Orca Quarry to San Francisco Bay, Vancouver, and Hawaii.

This news is a total 1027 time has been read