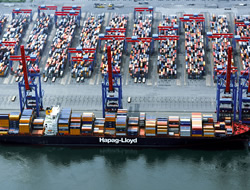 Hapag-Lloyd and Compania SudAmericana de Vapores secured conditional European Union approval on Thursday for their tie-up to create the worlds fourth-largest container shipping company.
The merger is important for the shipping industry which hopes more deals could help it to overcome the worst slump on record. And if regulators take a soft line on any concessions required to allow the deal to proceed, this could spur more consolidation in the industry.
The European Commission said the clearance was conditional on CSAV withdrawing from two consortia on the trade between northern Europe and the Caribbean and South America’s West Coast, where the merged entity would have faced insufficient competitive constraint to avoid a risk of price raises.
“Through the commitments, our decision averts the risk that the merger between Hapag Lloyd and CSAV could lead to any price increase,” EU Competition Commissioner Joaquin Almunia said in a statement.
Reuters reported on Sept. 5 that the merger would be cleared by the Commission after the companies offered concessions.
Hapag-Lloyd, the world’s No. 5 by capacity, is 22-percent owned by German travel group TUI AG. Vapores is majority-owned by the billionaire Luksic family, Chile’s richest.
Thomson Reuters
http://turkishmaritime.com.tr
This news is a total 5548 time has been read